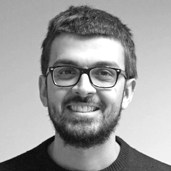 I first started working on the web dev front on 2010. It had to do with PHP + MySQL doing web-admin related stuff. I was also writing HTML, CSS and it was my first encounter with Javascript as i had to make some interactive plugins with voice recording and facebook API integration.

Then on 2011 i had my first contact with Ruby and Ruby On Rails. The company i worked for at the time had a custom built CMS base project which i extended and transformed it building many different sites according to project requirements. The RoR dive was a fascinating one as i experienced first hand the many advantages provided by this fantastic framework. I was also writing the templates, the CSS and of course the Javascript that was needed. I came to a very good understanding of cross-browser, media-queried CSS on that position.

After that, on the end of 2011, i started my focus on Javascript. I was fascinated by the interactive nature of what was produced by the code i wrote, and by how easy it was. The interpreted dynamic nature of the language was also a great appeal, although many could argue about that. It is a great language to do rapid prototyping, and it has the added bonus of being ubiquitous.

I then started dwelling into Coffeescript and loved it for its type-less, read-wow, don't worry about var characteristics, and i have not stopped writing in it ever since. I worked my way into writing proper jQuery plugins, producing the Selectorablium plugin, as well a templating one. I also started exploring the filed of library agnostic, cross-browser code, building a widget loading mini-library, as well as some widgets that consumed the company API. I rewrote all of the company's existing codebase into AMD modularly modular modules [1] and by using require.js and its optimizer we build a simple responsive JS loading mechanism. I then build the very first version of continuous intergation testign platform for the javascript code usign Testswarm, QUnit, Sinon.js and some code i built to help with the asyncronous nature of the testing environment.

Going on forward i took a turn back to plain old javascript which fortunately enough turned into ES6/7. I started writing next gen javascript with the help of Babel and i started to work with browserify to handle the bundling and transformations. All of this while delving into the fantastic world of backbone.js and Marionette. Finally i landed on React/Redux world, and subsequently JSX, enjoying the benefits of unidirectional data flow.

My future plans involve exploring reactive programming, finally creating some robust solutions on the server with node.js and trying to create a write once - deploy everywhere project using React and React Native.

I have had plenty of projects as a freelancer which led me to use some other tools as well. Some of them are the pjax plugin, the PHP framework Laravel and the Cordova/Phonegap platform to create some mobile applications. For that i also used the jQuery Mobile framework as well as a mix of Framework7 with Marionette.

I use Git as my version controll software.